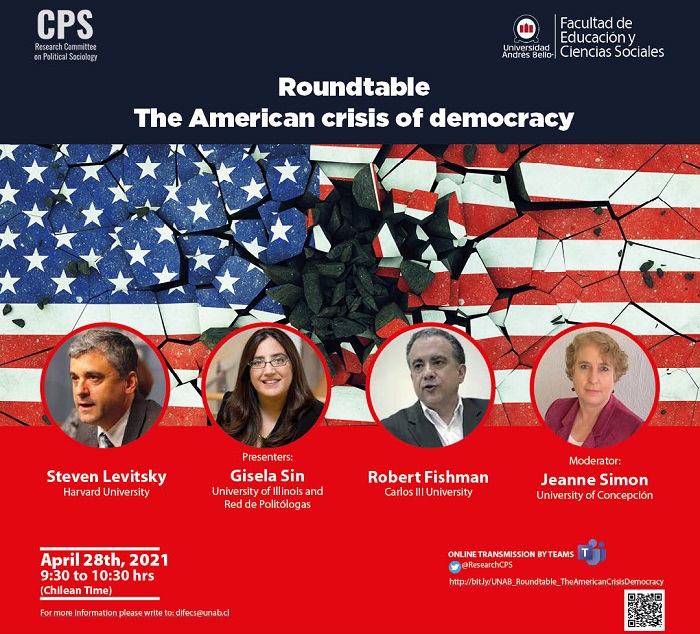 The instance will be a debate on the central features of the American crisis of democracy, giving some explanations for its emergence and prospects for the future.

Stéphanie Alenda, research director of the Faculty of Education and Social Sciences at Andrés Bello University and Chair of the Research Committee on Political Sociology (CPS) affiliated to the International Sociological Association (ISA-RC18) and the International Political Science Association (IPSA-RC06), invites to the First Roundtable organized by CPS, as part of the Permanent Seminar of RC06-18, that will take place on April 28th at 9h30 (Chilean time) and until 10h30.

A few words on this seminar and its modality:

Through discussions on the work of CPS authors, the seminar addresses ongoing phenomena from the perspectives of Political Sociology, connecting scholars’ research to current socio-political affairs. CPS authors such as Juan Linz, Stein Rokkan and many others have provided crucial tools for understanding party competition, challenges to democracy, polarization, and numerous other current themes.  The Research Committee continues in this tradition.

Once a month, the CPS invites authors to present their latest book in 25 minutes, summarizing their research process and main findings. Each presentation is followed by a 15-minute discussion led by an expert scholar on the subject, and the discussion is then open to the public for 30 minutes.

This permanent seminar is co-organized by the CPS and Andrés Bello University (UNAB), and it is sponsored by the ISA and IPSA. Every session is recorded and uploaded to the UNAB official social media platform for dissemination purposes.